Friday, April 2nd, 2021 —The Passport Index Q1 Report for 2021 uncovers the real-time state of global mobility in a standstill, as governments continue to further implement safety and security protocols to make travel a more seamless and responsible experience moving forward.

2020 was the year of lost travel plans. Prompting many to think that 2021 would be the year that makes up for it. But after diligent analysis of data collected from Passport Index throughout the start of 2021— the reality of global mobility paints a different picture.

The world is in fact slowly reopening, but not at the pace many hoped for.

While strict safety protocols and regulations continue to be part of the norm; people are still hesitant to cross borders in fear of a new wave, while many governments are not making the process any easier either. At least, not yet. From discussions about new vaccine passports to no-touch biometric collection at airports, the call for innovation has only grown louder.

It is now up to airlines, airports and governments to strategize and create a new and responsible, sustainable, and improved model of travel that will enhance the security, confidence, and experience for all travellers moving forward. 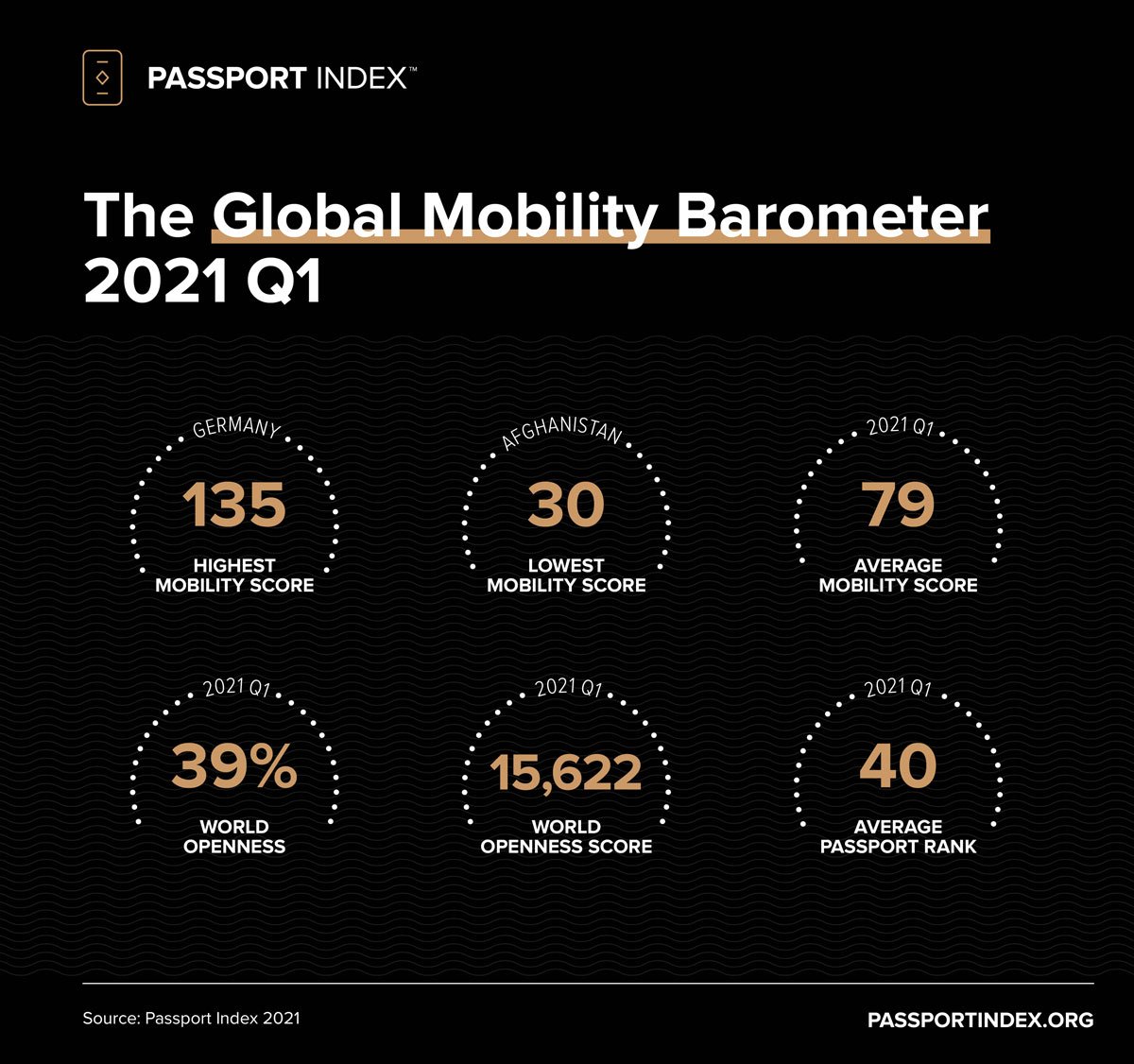 The future of travel on hold

A new era of travel is upon us — one that is centred around a sustainable and responsible model of mobility. Safety has rightly been the top priority for many people and will continue to be a vital point once normal travel returns. More and more governments are considering adopting new practices and regulations that will enable international travel to become a safe and sustainable experience for both visitors and their local population. 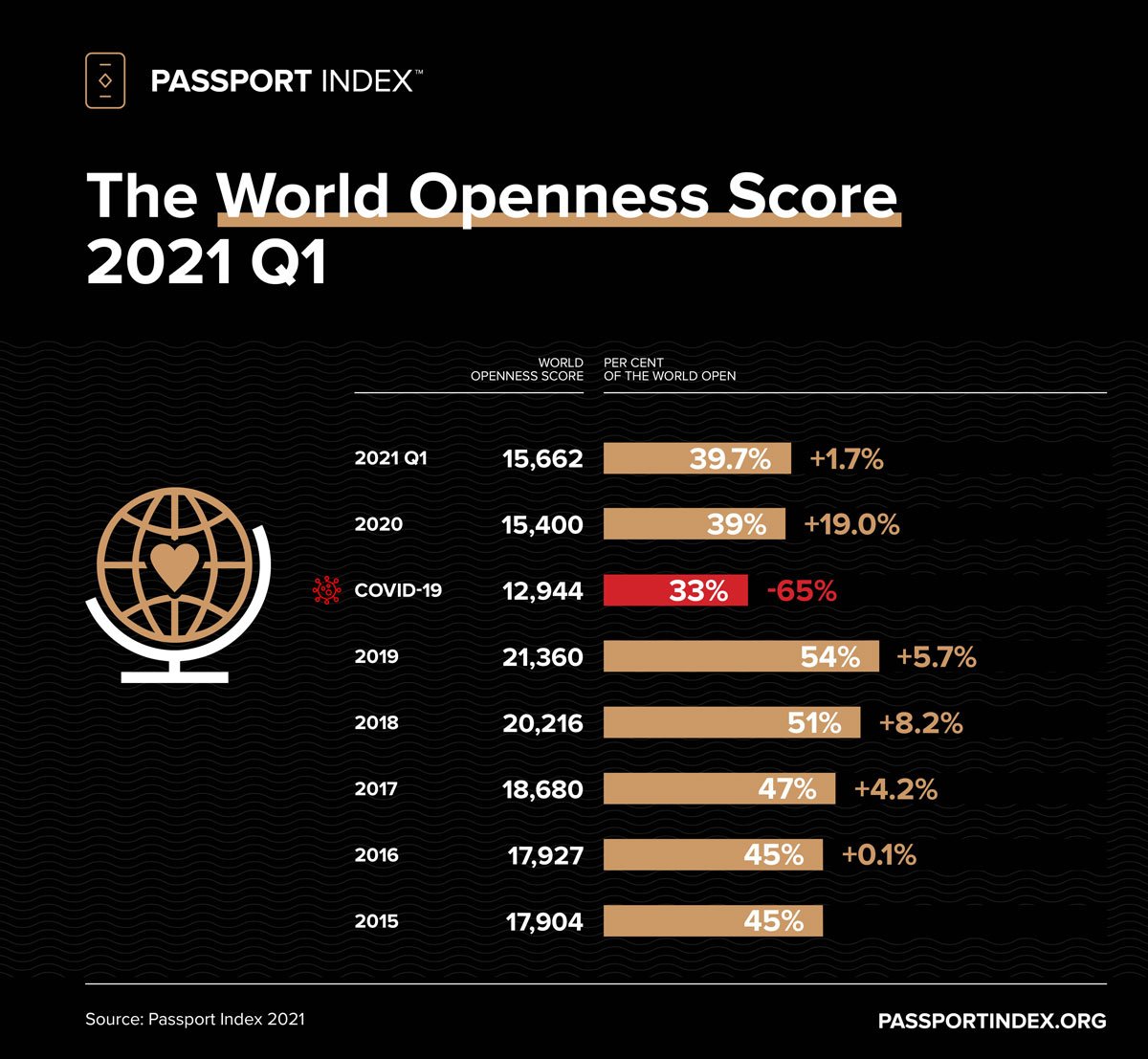 Big moves to start the quarter

Taking advantage of the stagnation in global mobility and appearing at the very bottom of the passport ranks, Iraq granted visa-on-arrival to citizens of over 30 countries, including the United States, United Kingdom, European Union states, Russia, China and other economic powerhouses such as Japan, South Korea, Canada, Australia, New Zealand and Switzerland.

Meanwhile, Russia was planning on following suit by issuing visa on arrivals to nearly 50 countries but by order of the Government of the Russian Federation the processing of visas were suspended in order to ensure state security, protect public health.

It is evident that in Q1 of 2021, global mobility remains on hold for many passports until further notice, while some use this disadvantage in their favour. 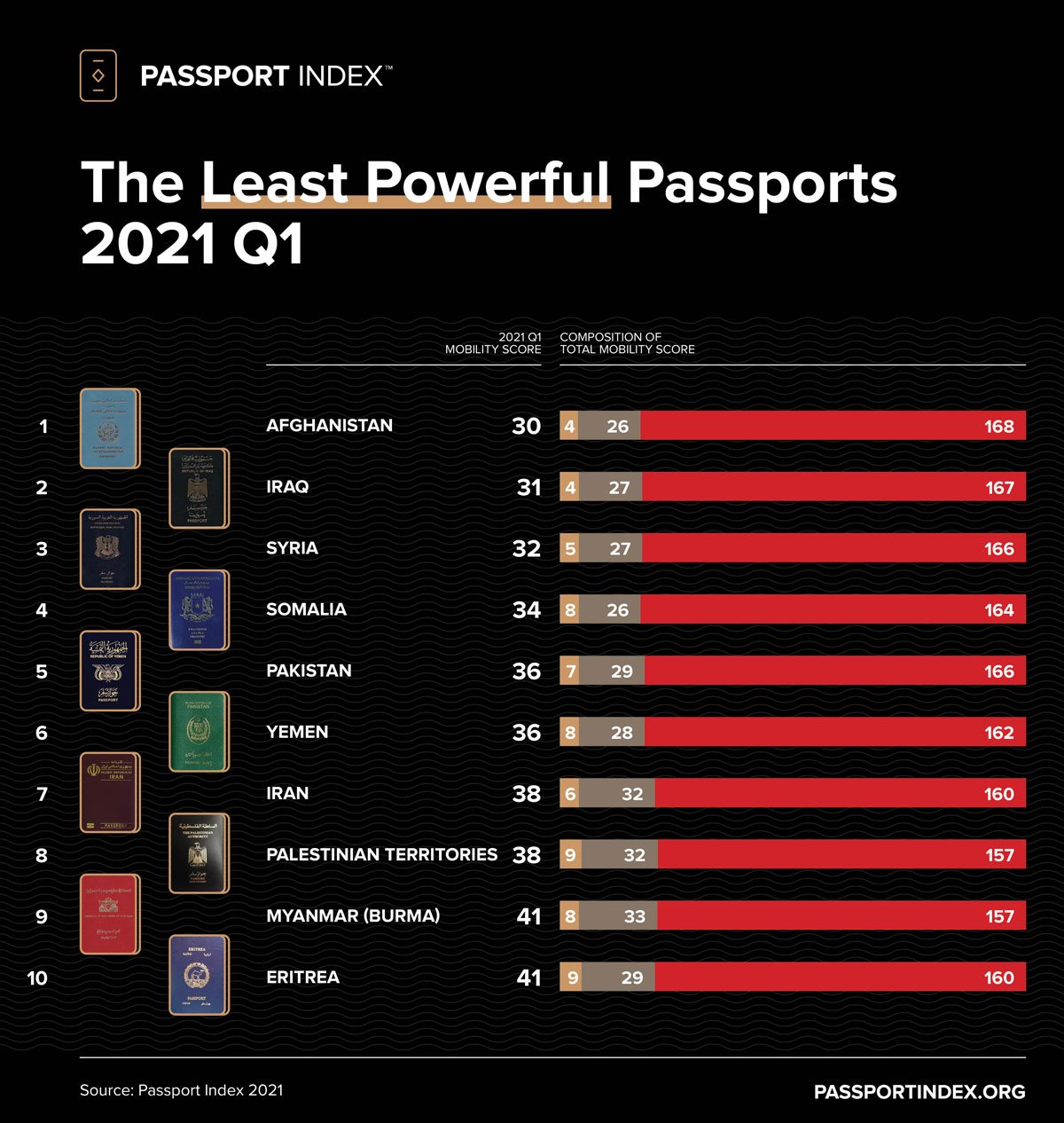 As humanity waited for global mobility to take flight once 2020 came to a close, we instead found ourselves at the other end of the line, in 2021, still waiting on hold. Europe continues to reign at the top of the world’s most powerful passports, though there has been an interesting shift in ranking.

At the end of 2019, Germany did not even appear in the top 10, but now leads the ranks with 135 MS – the most visa-free mobility than any other country in the world. Other newcomers to the top 10 rank are Italy and Denmark, while we see the United Kingdom disappear; pushed down from 7th place to 20th. One can only assume that this can be related to the appearance of a variant strain in the UK. 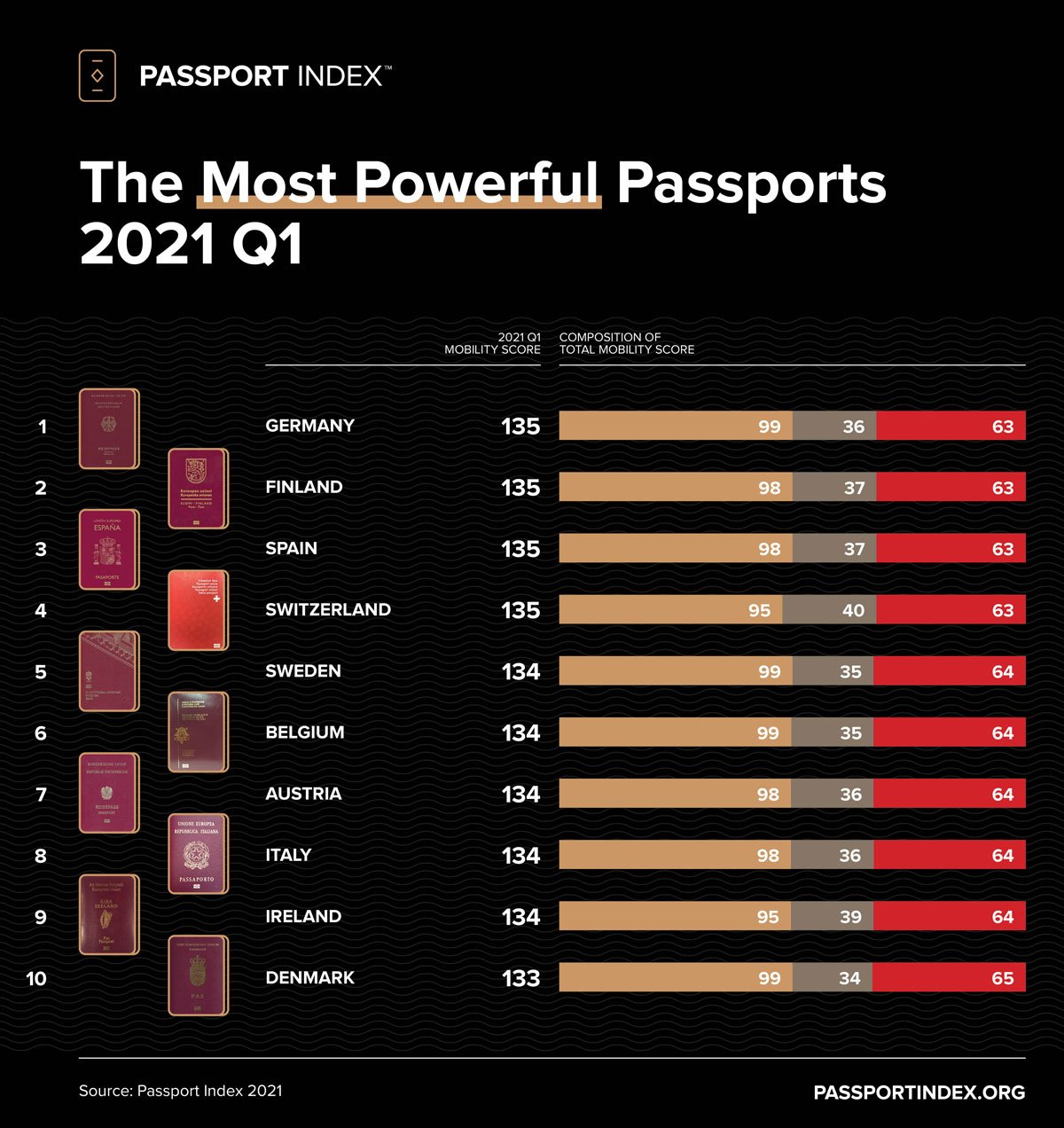 World Openness Score is the key measure to depict whether governments are willing to reopen borders, and with a mere 1.7% increase in 4 months, it seems that the full-throttle confidence in reinstating open borders, has yet to be reached.

Whether this will allow the world to further implement safety and security protocols to make travel more seamless and responsible, or whether this means that travel will have to change altogether through vaccine passports and biometric scans, one thing is for certain. While the world is on hold, global mobility is undergoing a thorough transformation.

Have you read the 2021 Passport Index Q1 Report?

2020 was the year of lost travel plans. Prompting many to think that 2021 would be the year that makes up for it. But after diligent analysis of data collected from Passport Index throughout the start of 2021— the reality of global mobility paints a different picture. The 2021 Passport Index Q1 Report reveals which countries remained at the top of the ranks and which slipped far below, as well as what to expect moving forward. 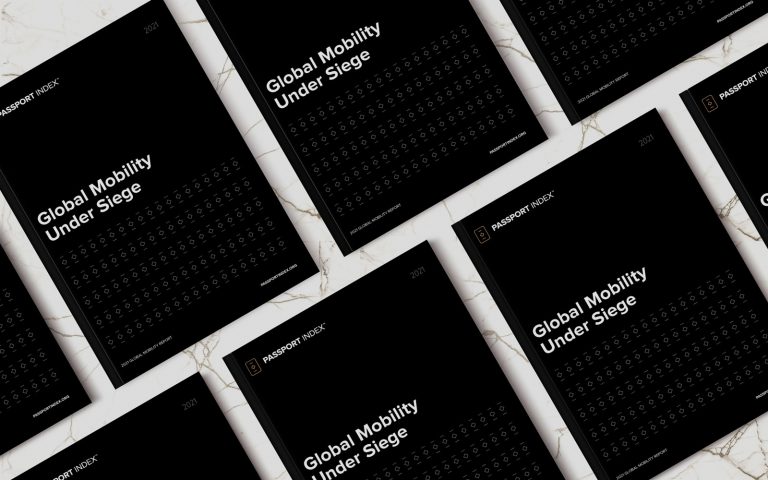 Digital Covid-19 vaccine certificates are here. So what’s the hold up?

Smile for the camera: How biometrics are changing border crossing

Global Reset: COVID-19 has unleashed a new wave of migration