As the keys that unlock our global mobility, these vital documents are more than pieces of paper for immigration officials to scrutinize. Well-designed passports speak to national identity, cultural heritage and, in some cases, a glimpse into the future of mobility technology.

Of the several new passport designs that came into circulation in 2022, we shortlisted three of the best, each boasting visuals that speak to their distinct national stories and next-generation security. 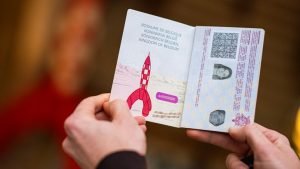 Waffles, beer, chocolate, Art Nouveau architecture. Belgium has no shortage of famous symbols. For its new passport design, however, Belgian officials opted to draw from the country’s rich heritage of cartoons and comic strips to transform its passport into artwork.

Unveiled in February 2022, the new design features a burgundy cover, similar to earlier versions, inscribed with markers like ‘European Union’ and ‘Kingdom of Belgium’ in gold lettering in four languages (the country’s three official languages, Dutch, French and German, plus English).

Inside, every page features an iconic cartoon character created by Belgian artists, such as Tintin, Lucky Luke, Spirou and Fantasio, Blake and Mortimer and the Smurfs. Another highlight is a leopard-like character, Marsupilami, who lives in the jungle and loves its freedom–a fitting figure for an international travel document.

Designed by the French firm Thales Group and the Belgian technology company Zetes, the passport’s classic comic scenes provide extra protection. Not only is the artwork extremely difficult to replicate, but it also transforms under UV light. For example, in the daytime, page two features the red-and-white checked rocket from Explorers on the Moon. Under UV light, it reveals Tintin in his spacesuit.

All in all, the playful yet sophisticated new passport reflects Belgium’s passport power. The country has long enjoyed a strong position in the Passport Index’s Global Passport Power Rank, currently tied at No. 3 with a Mobility Score of 173, thanks to visa-free access to 118 countries and visa-on-arrival in 47. 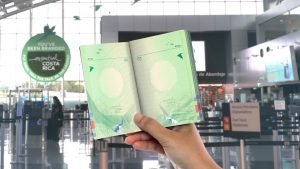 The country has also seen its passport power increase dramatically since 2015, the first year the Passport Index began charting data. In 2015, Costa Rica ranked No. 29 in the Global Passport Power Rank and worked its way up to No. 23 this year, with visa-free access to 90 countries and visa-on-arrival in 47. With its growing mobility and cooperative policies, it is no surprise then that the country has invested in a new passport design with symbolic design and smart technologies.

On top of placing Costa Rica at the vanguard of global mobility technology, the upgraded passport also scores points for its design. For the first time, the passport was designed by and for Costa Ricans. Country brand agency Essential Costa Rica led the overhaul, adding elements that represent the country’s values: biodiversity, renewable energy, education, peace and talent.

Illustrating these messages, the passport features a range of iconic symbols, from turtles to hammerhead sharks, Arenal Volcano, indigenous Boruca masks and instruments, and Costa Rica’s trademark slogan, ‘Pura Vida’, meaning ‘pure life’. As passport holders flip through the pages, a bird on the upper corner of the page appears to flap its wings and fly, perfectly encapsulating the spirit of global mobility.

The agency says these symbols also reinforce the country’s strengths. Costa Rica is home to 6.5% of the world’s biodiversity, uses almost 100% renewable energy and allocates 8% of GDP to education, according to Pedro Beirute, president of Essential Costa Rica.

The new passports proved so popular that the 2022 City Nation Place awards–an international forum highlighting the work of country brands in global marketing and communications–gave Essential Costa Rica top honors in the ‘Best Use of Design’ category. 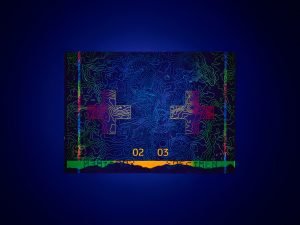 The passport stands out with a vivid red cover–the same shade as the national flag–and many details to discover inside. For instance, the design of the stamp page represents Switzerland’s 26cantons, or administrative districts, “from the Alpine peaks down to the valleys,” according to the Federal Office of Police.

The first page leads with an image of the Pizzo Rotondo, a 3,190-meter-high peak in the Gotthard Massif mountain range in the Alps and the source of Switzerland’s largest rivers. From there, the pages continue to showcase the country’s two major natural symbols: mountains and water.

In addition to environmental beauty, the design also celebrates Switzerland’s global culture. One stamp page represents the so-called ‘Fifth Switzerland’–the estimated 788,000 Swiss nationals living abroad (about 10% of the country’s population). Notably, the Swiss passport currently ties for the No. 2 spot on the Global Passport Power Rank with a Mobility Score of 174, reflecting citizens’ visa-free access to 115 countries and visa-on-arrival in 50.

Within these striking images lie the latest biometric and security technologies. Swiss company Retinaa designed the passport with state-of-the-art capabilities, including everything from UV light symbols and optically variable ink to a watermark representing a quartz crystal.

All told, this passport might be the best representation of Switzerland today. The country that seamlessly fuses cutting-edge technology, modernity and a global mentality with its natural wonders and rich traditions.

A New Era of Sustainable Global Travel Takes Off